Following on from our 1st story, we’ll be continuing the epic tale of our research into Cloudflare pages in this second installment. If you haven’t read part 1, you can read it here.

We pick up where we left off, after harvesting a bunch of secrets from the Cloudflare pages build system, and getting our reverse shell running as the AzDevOps+ user, which gave us root in the container.

As we reported the previous vulnerabilities to Cloudflare, they systemically applied fixes to the code orchestrating the builds, which locked us back out. We had to find a new way back in each time. While we still had access though, we wanted to try and find further injection bugs. Having exhausted the low hanging fruit for escaping the buildbot user, we now wanted to get a root shell in the Cloudflare Pages CI hosts. You may remember us talking a big game about containers, privilege escalation, and container escape earlier in this post. In any CD system you are looking at, these can often lead to some really good findings if you can achieve them - this is because the container is often improperly treated as a security boundary by application developers. In the case of Cloudflare pages, this was the case.

In the previous post in thise series, we talked about the buildbot user, and the AzDevOps+ user, and the fact that our build scripts were running in the context of this user as part of the build process, potentially inside a container. The previous two findings were all performed in the context of this buildbot user, and eventually AzDevOps+ - which gave us root in the container, but we wanted to try a little harder and see if we could execute code as root on the host, and then potentially escape the container. First let’s look for some other ways we can get back into the AzDevOps+ user, should we get locked out - given we currently have access and the build tooling source code.

Referring again to the screenshot from the first set of findings, of the process tree -

You can see here that we have processes in the tree running as root, and as AzDevops+. Interestingly, this process tree tells us quite a lot about the execution environment

Given the above factors, compromising the integrity of any of the scripts in the process tree prior to the sudo have a high chance of giving us passwordless root, inside a container. And having root in a container gives us a strong chance of escaping the container. With that in mind, we dug into the scripts in question.

We focused first on the page build script, /opt/pages/build_tool/build.sh. Sadly, this looked fairly simple and didn’t present a lot of opportunity for command injection. We moved further up the process tree.

Looking at the .js scripts in the __w directory, it became apparent pretty quickly that these were part of the Microsoft Azure DevOps Pipelines agent. We’d like to quickly take a moment to thank Microsoft for their transparency and recent commitment to Open Source - because the entire build agent was available to us on GitHub.

Reading the documentation for Pipelines, you are very quickly introduced to the format and purpose of the .azure-pipelines.yml file. The Azure DevOps Pipelines agent operates on a .yaml configuration file, which we briefly mentioned earlier in this post. Essentially, it is a workflow file and details the steps which will be executed by the agent inside of an Azure VM when the pipeline is executed in Azure DevOps. We didn’t actually have to dig too deep into the agent code to work out how this all works due to the extensive documentation.

Reading over the documentation, looking for ways we might be able to run our own code under the Pipelines agent, Sean noticed this documentation section on Azure DevOps Pipelines variables, specifically that that can be interpolated inside the YAML. Normally, you would assume that if Cloudflare pages was generating an Azure DevOps Pipeline file to run our builds, they would be sanitising variables for the interpolation patterns detailed in the document.

To test this assumption, which is a key part of finding good bugs - we tried to insert some interpolated Azure DevOps Pipeline variables into our build settings, to see if we could use them to interpolate strings we controlled into the build steps we should not be able to control. Keeping In mind the commands in the Pipeline configuration would be running as the AzureDevOps user, which we strongly suspect has passwordless sudo, we went looking for a useful variable to set.

We found the below command which uses the account_env variable to generate the command used to run the build script. If we can control account_env, we can likely run an arbitrary command before the sudo happens, as $() substitutions happen prior to execution of a command in bash, in a subshell, which runs in the context of the user running the command. In our case, the contents of account_env would be evaluated (and executed!) as the AzureDevops user prior to the sudo to buildbot, which is exactly the outcome we want.

With this target input in mind, we added the following to the “build command” in our Cloudflare pages project -

This would tell Azure DevOps Pipelines (hopefully) to set the account_env variable in the Pipelines configuration to the string ‘;bash /tmp/shell.sh; echo’. /tmp/shell.sh is unsurprisingly, a reverse shell - and is part of our Git repository. If the variable injection works, and we can inject this command, the reverse shell should be checked out in time for the evaluation of $(account_env) to happen, which would trigger our reverse shell as the AzureDevOps user.

Running the job, we receive -

…a shell, as AzureDevops_azpcontainer - the full, non-truncated username running the Pipelines again. The username also strongly supports the fact that we are in a container, as well as the UUID hostname, which is commonly seen with Docker containers. We’ve now got a second way back to this user, and another report to file.

Now that we’ve got a few ways in, it’s time to really break out the privilege escalation and go for a full container escape. Firstly, in our new context, we poke around the filesystem. One of the easiest ways to break out of containers (and a bit of a cardinal sin) is if the Docker socket is bind-mounted or accessible via TCP without TLS from inside the container. As luck would have it, there was indeed a /var/run/docker.sock present in the environment. It was owned by root. Testing our theory that the root in the container we could access via sudo would still be able to access the socket, despite the user namespace remapping which occurs by default with docker, meaning the UID of root in the container maps to an ineffective user ID in the host kernel. Naturally, we attempted to check what was at the other end of the docker socket.

So, we installed docker inside our container. Executing mount showed the presence of overlayfs and a series of bind mounts for files like /etc/resolv.conf, confirming we are indeed inside of a docker container, so an escape would be worthwhile if we could pull it off.

At this point, we had docker installed, and root access inside the container. The container escape with this access is actually really easy. We knew at this point we were trapped inside -

We simply ran the below command, to create a “super privileged container” -

Let’s dig into those arguments a little -

Googling, we realised that these were in fact tokens which the instance used for authenticating with Azure Devops itself. Interesting! Similar to instance AWS tokens obtainable via the cloud instance metadata APIs. Using these we could say a friendly Windows Hello to Cloudflare’s Azure Devops Organisation.

With this, we were able to list all of Cloudflare’s users within this project: 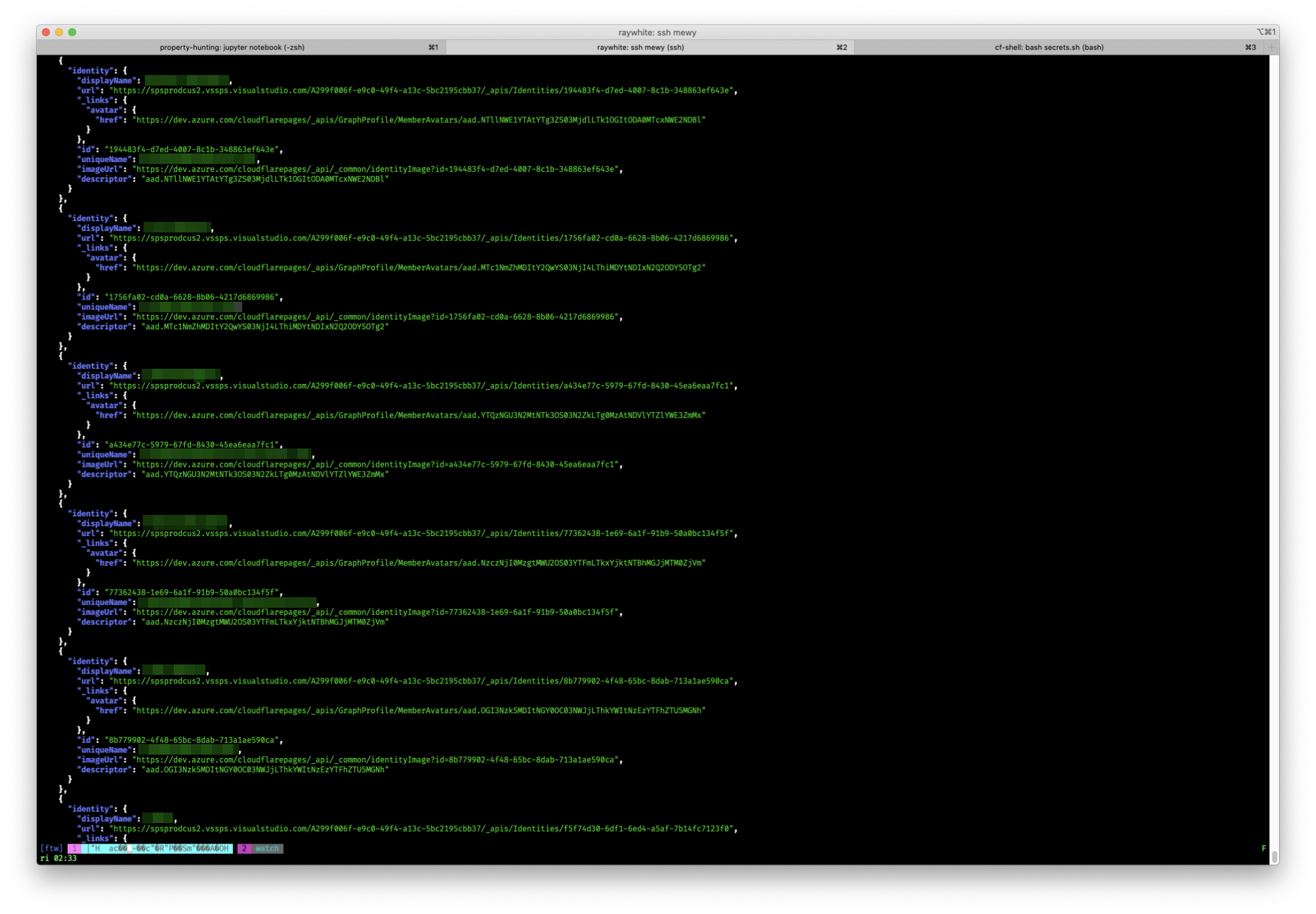 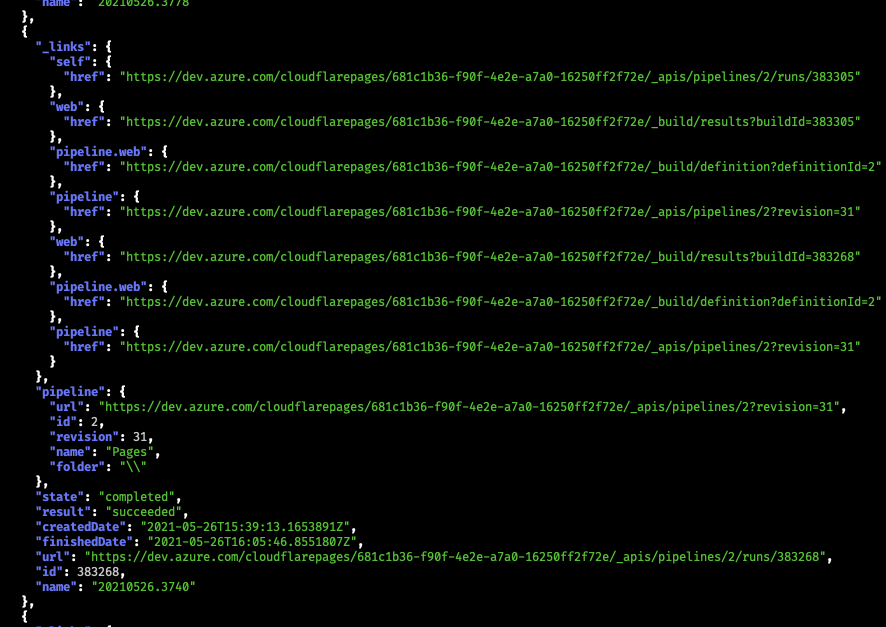 We had achieved our goal of stealing Github and Cloudflare tokens from the platform, but we had also managed privilege escalation to root in the container, escaping the confinement of the container we were in to get a root shell on the host, and ultimately getting access to the Azure Devops Organisation for Cloudflare.

In remediating this issue, there’s multiple points of defense in depth that could be utilized to prevent this from occurring:

At this point, we submitted all our bugs to Cloudflare, and they very quickly triaged and began attempting to remediate the issues. We asked to disclose initially, however very reasonably their response was to request we stop testing until they had mitigated the vulnerabilities.

After assessing their options, Cloudflare decided to pursue different architectures for Cloudflare Pages not based on Azure Pipelines. They also requested that we not disclose until they had finished their rearchitecture. It’s not every day you get to say you hacked a platform to the point where it had to be totally rearchitected - but here we are. You might think that would have been enough, but join us in The return of the secrets: part 3 for the final part of our research, where we look at the re-architected platform. Or, head back to part 1.

James Hebden is a backend engineer at Assetnote, a platform for continuous security monitoring of your external attack surface. James is interested in recon and finding security bugs in hardware, servers and networking equipment.

Sean Yeoh is the engineering lead at Assetnote, a platform for continuous security monitoring of your external attack surface. Sean is a casual bug bounty hunter, occasionally manually finding critical bugs while his automations submit the rest. He has presented at DEFCON and Hack In The Box, and lectured Web Application Security at UNSW.